It’s time to act against disinformation: the debate hosted by Farnesina and IDMO 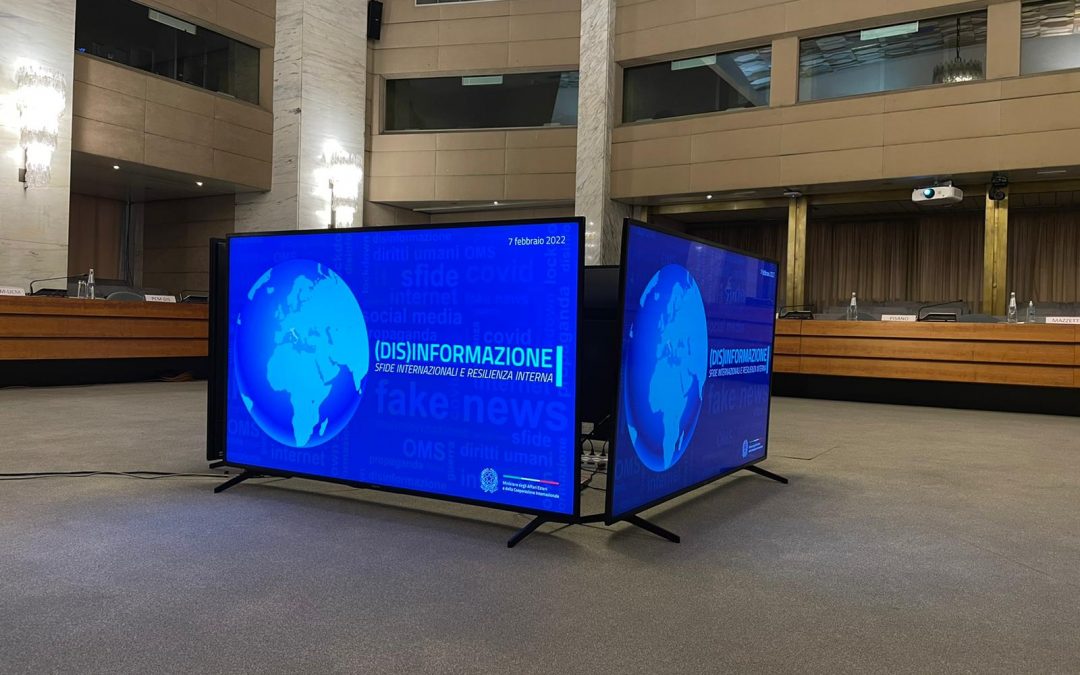 The Italian Digital Media Observatory and the Italian Ministry of Foreign Affairs discussed the spreading of fake news and the challenges it poses.

Disinformation, international challenges and internal resilience were the main themes discussed during the conference at the Farnesina building in Rome, home of the Ministry of Foreign Affairs. Many were the people and the companies representing Italy. Everyone in the room shared the same desire to defeat the circulation of fake news.

Debate on disinformation at Farnesina, the lesson of Professor Aral

«Now is the time to act» said from the skype meeting Sinan Aral, Professor of Management, Marketing and Data Science at the Massachusetts Institute of Technology. «When I began studying misinformation people came up to me saying… “oh this is not important”, but now they all understand the severe impact that disinformation has on the world».

During the conference, Professor Aral explained the three essential elements of disinformation:

First, people have to understand that the problem is not related to just information spreading online, but it’s socio-economic structures that spread falsity as well.

Second, people have to deal with the incentives that create fake news and the profit companies get from them.

Third, in order to defeat mis-information it would be a good start to label information. «When you go to the grocery store, food is labeled with calories and ingredients. We have no labels when we speak about information that we consume. There should be an editorial policy, a fact checker who can give reliability to the content». Before closing the meeting, the professor asked one last question: «Why do fake news spread so fast?» And then he answered: «Human attention is drawn to novelty, things that are surprising and shocking for the reader. The more surprising the content, the more it becomes spreadable».

The Italian Digital Media Observatory took part in the event with its representatives Gianni Riotta, IDMO Coordinator, and Professor Elena Musi.  Along with IDMO they also work with other important European projects as part of the European Commission’s efforts to fight misinformation and to raise awareness about digital and media issues. Among them MediaFutures, a programme that intends to restore the media value chain. The aim is establishing a data-driven innovation hub to offer grant funding and support for startups and artists, with a civic orientation. IDMO and Media Futures will bring together experts of diverse fields of study to create an open dialogue about the close relationship between the phenomenon of disinformation and civil society.

During the event, Professor Elena Musi distinguishes between Misinformation, news that have wrong details but no intention of creating damage to other people, and Disinformation which instead is created specifically to damage and harm others. There are several techniques used to prevent the spread of fake news, such as de-bunking, always double checking after reading, or pre-bunking, always double checking before reading. IDMO, said Gianni Riotta, «is one of the first national hub observatories created and connected to the European Digital Media Observatory. Not all countries have a hub yet». If everyone stands together, then there will be a possibility to change.

«The phenomenon of disinformation is taking on worrying characteristics» said Italian Minister of Foreign Affairs, Luigi Di Maio. «During the global chaos of the pandemic, fake news caused fear and disorientation and unreliable contents reached giant numbers and» he added, «human rights have to exist both online and offline». Very worried, he specified that there must be a commitment by everyone towards fighting disinformation: «People have to prefer transparency, quality and good information of the content».

Receiving reliable news is a component of freedom of expression.

The meeting was reaching its end when Gianni Riotta quoted Maria Ressa, Nobel Prize for peace 2021: «it is true that there are rivers of disinformation, but I can’t abandon the internet because it is the only way that I have to reach my community».

Websites should acknowledge the increasing problems. There has to be more critical thinking. Everyone should be together for a better internet.