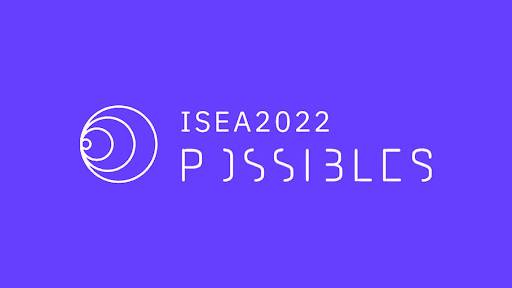 The 27th International Symposium of Electronic Art (ISEA2022) took place in Barcelona between 10 and 16 June under the theme of “Possibles”.

ISEA is an annual international event where artists, scientists, technologists and researchers, in general, meet to explore the intersections between art, science, technology and society. This edition was organized by UOC (Universitat Oberta de Catalunya) and with the involvement of the local and international community, including cultural and governmental institutions.

The Symposium invited the participants to explore the world that we are living around four themes: “Human and Non-Human”, delves into our relationship with machines and animals; “Natures and Worlds”, explores climate change and the viability of living off-world; “Futures and Heritages”, considers the role of history and data excess; and “Educations and Societies”, raises challenges such as how to embrace art as a part of scientific and technical knowledge.

ISEA2022 Barcelona has built an extended program with activities around Catalonia to participate in over the year. Among these activities, Varvara and Mar, one of the artists in residency in this second cohort of MediaFutures with the project “Time-Lapse Migration”, are exhibiting “Psychedelic Trips” in Alalimón Galeria until October 30th. A solo show that talks about the creative processes in the field of deep learning.

The symposium included multiple formats like presentations by experts and institutions, talks by artists, posters and demos, round table discussions, workshops and performances. In addition to these formats, more than 80 works were involved in the exhibition project tackling relevant aspects in MediaFutures, like Artificial Intelligence and the interaction between humans and machines, the use of data and information, and the integration of arts into science and technology among other things.

ISEA2023 will be hosted in Europe again, after more than 10 years away. IRCAM is part of the organisation committee of ISEA2023 which will take place in Paris on May 2023 under the topic “Symbiosis”.