From sock puppets to immersive and virtual technologies to reshape the media value chain: MediaFutures welcomes the new project teams 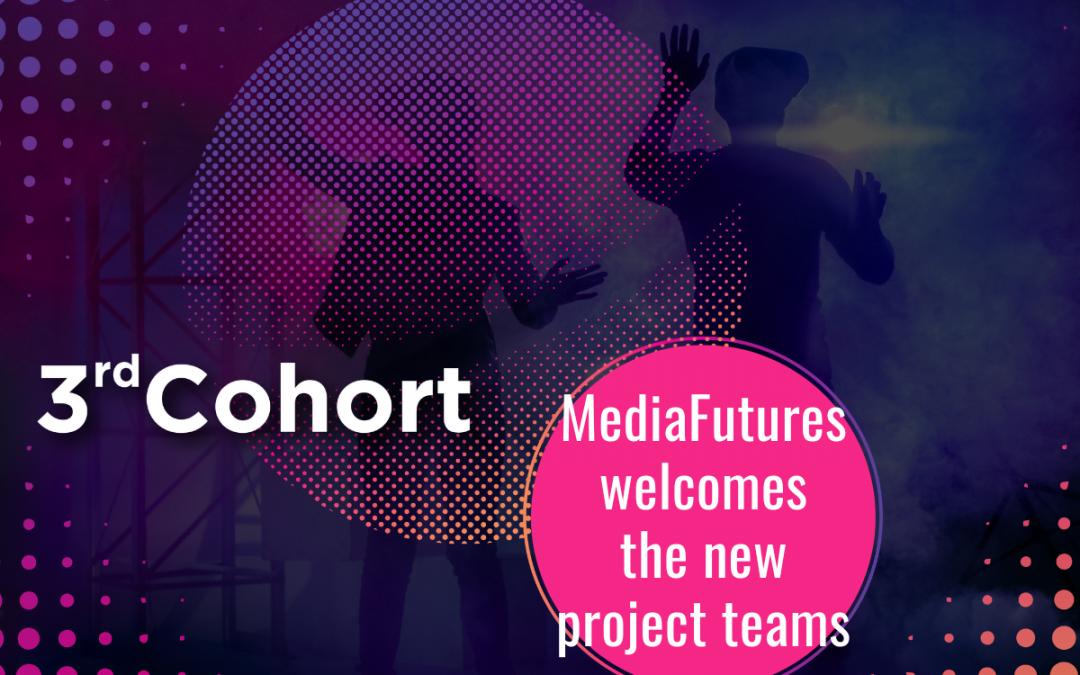 Startups and artists have been selected to join the MediaFutures support programme, and to start working on tackling online misinformation with innovative uses of data.

MediaFutures – the European data innovation hub bringing together startups, SMEs and artists to solve challenges in the media industry – has announced 24 new creative projects that join the Accelerator (startups & SMEs)/ Residency (artists) programme. The winners will receive a grant up to €40,000 for artists and up to €80,000 for startups, alongside expert consultancy and support to reshape the media value chain.

In June 2022, MediaFutures launched the third and final Open Call focusing on ONLINE MISINFORMATION AND DISINFORMATION, looking for projects that actively engage citizens through co-design, user testing, or other participatory processes that give citizens a stake in the project’s development. Anyone with an innovative idea could apply to join one of the three tracks:

The Open Call closed on the 30rd of August with 99 eligible applications from 32 countries around the World!

All applications have been evaluated by a jury panel composed of MediaFutures organisations and external experts, and 24 projects have been selected:

Alexandra Garatzogianni, Coordinator of MediaFutures, Head of Knowledge and Technology Transfer at TIB and Coordinator of EU Projects at Leibniz University of Hannover, said: “At MediaFutures, we are delighted and honoured to collaborate with our third and final cohort, coupling the expertise, experience and networks of all consortium partners, with the novel, richly diverse and cutting-edge cohort projects, that address multi-faceted angles of the evolving media, art and tech landscape. Our joint, strong focus remains on striving to break new ground in the domains of online misinformation and disinformation and enabling our cohort to flourish, grow and thrive”.

Louise Enjalbert, IRCAM, Art-Tech coordinator, in charge of MediaFutures residency programme, adds: “For the third year, we have the opportunity to support innovative projects from all over the world. It’s very exciting to gather extremely diverse teams of creatives, entrepreneurs, engineers and together find solutions to tackle mis and disinformation”.

Fernanda Rojas Aizpuru, NMA, Project Manager EU Projects, in charge of  MediaFutures acceleration programme, adds:  “We are very excited for the third and final cohort of the MediaFutures programme, we have already seen a lot of promising projects with innovative and disruptive solutions for our challenge “tackling misinformation and disinformation in the media industry”. Looking forward to the START Phase selection”.

Ctrl. Alt. Img. Through an interactive installation, the project asks how to use data and dialogue to harness collective knowledge to arrive at an alternative approach to the way underrepresented groups are portrayed in the media and how this informs the way images are generated by machines and used.

Honest Signals. Honest Signals will reinforce the importance of high-quality media and also the need for citizens to critically engage with the information that is shared via social media platforms. The data focus for the residency project is climate disinformation where the cost of a polluted information ecosystem is a failure to take the urgent action needed to save the planet.

Mining Hate. Mining Hate is an improvised interactive performance built with audience generated content that seeks to create awareness of the practices used by anonymous hackers to target female journalists and minorities in India to spread misinformation.

Trolls vs Elves. I-Doc. “Trolls vs Elves” i-doc is a synergy between a documentary film and a game. It delves into the issue of disinformation online in the context of Ukrainian refugees, investigating the operations of internet trolls and activists called Cyber Elves.

Online Debate for Impact. The project aims to empower readers to counter disinformation and misinformation in online discussion by allowing them to fact check their comments before they post them on the debating platform for media sites.

Overtone: Misinformation based on Article DNA. Overtone provides insight by looking at the qualities of the text itself, rather than tertiary metrics such as clicks and shares. It uses the advances in NLP to make the type of data that teams of analysts could generate available to media companies.

POLLTIX: REDUCING POLARISATION THROUGH CONSENSUS-BUILDING. A new type of public consultation which aims to address the central issue behind the proliferation of disinformation. It will allow the public sector stakeholders to ask open-ended questions, while citizens will be able to submit their own answers and rate answers submitted by others.

Queering the Quantified Self. A platform for citizens to create, own and analyse information about our bodies. It proposes an alternative: the users who make the data are the ones who own it; the communities who need the research run analyses themselves.

Questvertising as an alternative for hard paywalls that keeps the reliable content open to the general public. The “moneyless paywall” solution is a combination of advertising and a content gate in which users “pay” by answering a question, usually concerning the ad, what generates a significant income for publishers. In return for the answer, the user gets access to the rest of the article.

Veïns – Neighbours. A conversational mobile game that allows the crowdsourcing of data about intercultural stereotypes and rumours at the local level by collecting information from all in-game interactions

Viriditas – Screen every investment for climate change risk. Viriditas makes the process for screening investment funds and companies easier than ever before: users can see a particular fund or company’s risk level and view additional indicators that help to understand why the risk level is as it is, and news articles to show potential for improvement or signs of greenwashing.

The following projects join the collaborative programme for joint startup and artist teams.

Blind Spots. An interactive audio walk which adapts dynamically to changing real world parameters. It focuses on cognitive biases and how they make us vulnerable to misinformation and manipulation. The audio walk draws the audience’s attention to the extent to which cognitive biases shape their everyday lives.

Dark Listening: Deconstructing Coercive Content Discovery in Music. Identities — like music — should be discovered, not assigned. A company that makes its money from advertising benefits from a customer base that fits neatly into algorithmic boxes that can be easily targeted with advertising and cultural messaging.

Dataware. Dataware is a data awareness tool and art installation, conceived as an initiative to raise awareness of the impacts of climate change in urban context through the medium of data art. This awareness-raising is oriented towards the most disadvantaged social and economic groups of citizens to decrease the risks resulting from the impact of extreme weather events.

Head Radio. The project addresses the challenge of online misinformation and disinformation by creating an educational experience as a board game. The goal is to achieve engagement and empathy through gamification and storytelling rather than presenting dry facts and numbers.

I (be)come. An online theatre performance with which the audience can interact by using polarising sliders that have statements they can choose from. The aim is to emphasise how we both collectively and individually (in the hands of AI data analysis) participate in the change of online media content.

Ekometic DUBB•E. Technology and art project grounded on the idea that data is a malleable material that can be transformed and transmuted into a variety of media beyond the conventional, silent, representations such as charts, maps, graphs and static images in general.

fakingNE.WS: video discussions about post-truth. The project aims to look behind the scenes of fake news and misinformation by bringing together a diverse set of stakeholders in interactive video discussions. It involves artists, scientists, media experts, politicians and the general public to analyse post-truth narratives and co-develop micro mockumentaries for educational purposes.

Metagraffiti. The project will build and position large scale digital artworks that can be experienced through Augmented Reality technology: the artworks will appear when 5 selected media/new-media headquarters physical buildings around European cities will be scanned through a smart-phone.

RELU – dancing with REaL and Unreal. This project sees immersive and virtual media technology as an opportunity to address disinformation, misrepresentation and stigmatisation of disability in mainstream media by tackling obstacles to access and visibility for both physically disabled and neurodivergent people.

“SOMEONE MUST HAVE BEEN TELLING LIES…”. The project will address misinformation and disinformation by creating pathways for marginalised people and communities to find, create and use data to build community power.