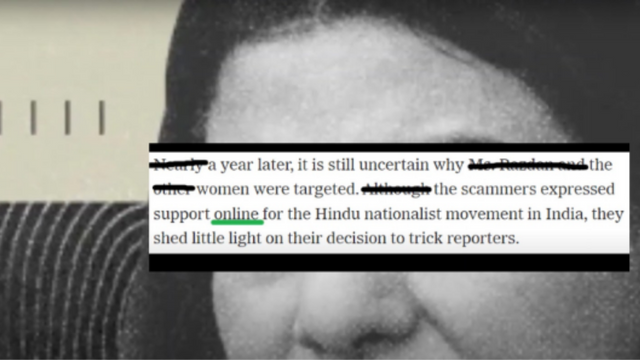 Mining Hate is an improvised interactive performance built with audience generated content that seeks to create awareness of the practices used by anonymous hackers to target female journalists and minorities in India to spread misinformation.

In 2019 and 2020, four female Indian journalists were targeted by sophisticated anonymous hackers. All three were scammed into believing that they were being offered jobs at Harvard University. The hackers were never caught and, most oddly, their motives remain a mystery, since they never asked nor received money. In July 2021, an open source application named Sulli Deals appeared on GitHub. Again, in November 2022, a similar app named Bulli Bai appeared on the same platform. Both applications used images and names of Muslim professional women, many journalists critical of the central government, to announce an “auction” of the women with a price tag attached to the individual profiles. Men could bid to “buy” the women. The purpose of this application appeared to be nothing more than the humiliation of the women, since there was no monetary benefit to the anonymous perpetrators.

Our performance will be built on the history of these incidents. Improvised scenes demonstrating how anonymous hackers build, target and persuade their intended victims will use content generated by the audience during the performance. The responses of the journalists will also be presented as verbatim theatre by actors. The team is represented by Kaivalya Plays, with a rich history of applying improvisation in performance to areas of social interest, and individuals qualified in data journalism and technological innovation for the arts.

Since 2018, Kaivalya Plays has built upon a foundation of applied improvisation to create original work focused on mental health and performer safety, as well as pioneering technological innovation in the performing arts. In 2018, Kaivalya Plays received the Refunction Grant from the Goethe Institut to create Unravel, an improvised performance that argued for the mental health benefits of theatre games. This further evolved into a year-long workshop programme titled HEADSPACE, accessible to anyone that continues until the present day. Alongside this work, we became interested in investigating and creating resources for performer safety and in 2020 launched the Safety Research Study, a first of its kind research project which was funded a year later by the India Foundation for the Arts.

Varoon P. Anand is the Artistic Director of Kaivalya Plays, as well as an India correspondent for France 24 (Bogota bureau) , Radio France International and a Spanish professor for the Instituto Cervantes New Delhi. Previously, Varoon also worked as Principal Correspondent for India Today, the country’s most widely read newsmagazine. Varoon also serves as trustee of the Nursery Theatre (UK) Varoon received the Refunction Grant (2018) from the Goethe Institut New Delhi to create Unravel, an improvised play on the applications of theatre games to mental health, the Gender Bender Grant (2019) from Goethe Institut Bangalore to create Aguebao, a performance piece about the commodification of gender identities, the India Foundation for the Arts Research Grant (2021) to study performer safety in the arts. In 2019, Varoon’s adaptation of Tirso de Molina’s classical Spanish play Marta la piadosa became the first play from India to ever perform at the International Classical Theatre Festival in Almagro, Spain. He also authored the play Footage (2022), which fictionalizes the details of an infamous sexual assault case of an Indian journalist against her editor-in-chief.

Gaurav Singh Nijjer (he/him) is a theatre-maker, creative technologist and arts manager from New Delhi, India. He’s the General Manager at Kaivalya Plays, an Indian performing arts company and works as a freelancer with arts collectives across India and Europe. He graduated with MA in Advanced Theatre Practice (Distinction) at the Royal Central School of Speech and Drama in 2021, receiving the prestigious Chevening Scholarship from the UK Government. In 2022, he moved to Berlin, Germany. As a theatre-maker, his artistic practice investigates live performance and audience-performer interactivity using technology and distanced composition. He brings his professional experience in marketing, technology and data to explore new ways of engaging audiences, in the theatre, at home and otherwise. In 2021, he co-directed and designed ‘Lifeline 99 99’, a unique one-on-one interactive performance on the telephone that re-imagined performance formats for the pandemic and received widespread critical acclaim. He served as the technical director for ‘The Flabby Breasted Virgin & Other Sordid Tales’, a playful, irreverent digital performance exploring how women’s bodies are taught, perceived and practised within medical education in India. In 2021, he received two grants under the C3: Codes, Creativity and Community program by Goethe-Institut India and BeFantastic to create open-source community platforms for arts funding and arts education.

Arjun Srinivas is a researcher and journalist currently pursuing his PhD at the Queensland University of Technology’s Digital Media Research Centre. He is also the recipient of an Australian Research Council sponsored scholarship to study the impact of algorithms and automation on digital media and communication. He is based in Brisbane, Australia. In the past, he has worked as a data journalist with the Hindustan Times group, one of India’s leading media enterprises.