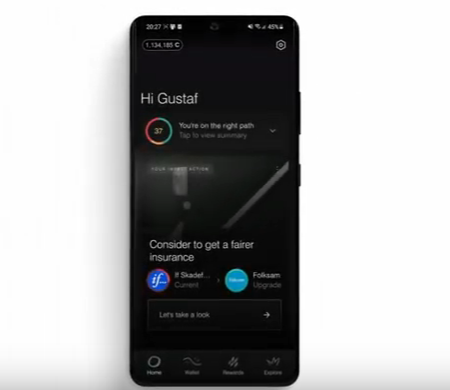 Corporations have successfully managed to put the blame and focus for climate change on the individual. It’s your emissions, your pollution, and you that need to change. What companies themselves do is covered in a thick haze of lengthy reports and marketing stunts that many times approach greenwashing.

It’s time to put the focus back on the companies by letting citizens expose and compare what companies do, giving everyone the tool to make impact with their wallet. This is the very tool the Gokind team has created as part of the MediaFutures program. A tool that creates a competitive environment where sustainability is the deciding factor.

The Gokind platform is powered by the EU’s Open Banking framework, a framework that was created to bring back the power of banking information to the citizens. Gokind now goes one step further and channels this power to rally and empower citizens to put pressure on companies to accelerate change.

How did it start?
The Stockholm-based fintech startup is deploying the world’s first loyalty program for the planet. Their small team of impact-driven entrepreneurs is on a mission that started with a shared struggle: wanting to make more sustainable choices, but not really knowing how.

It was hard to sort out which companies actually lived up to their promises, and which were just greenwashing their products and practices through marketing campaigns. After realising the only way to make the distinction was to spend hours on end reading companies’ lengthy annual and sustainability reports, they knew someone needed to change this. So they set out to transform how company transparency and accountability can be achieved.

Besides helping citizens more easily understand a company’s impact, Gokind is also nudging people to consume from more ethical and sustainable companies through gamification and rewards that are unlocked when you increase the share of top performing companies in your wallet and decrease underperforming companies.

Gokind is closing the gap between the vast majority of citizens that want to make sustainable
choices & the minority that actually make such choices. A tool that channels the power of the masses.

A new way to democratize impact data.
Being evaluated by Gokind is not a choice for companies. It is a service for all of us: citizens and consumers. Gokind provides a completely independent evaluation of the vast majority of companies we as citizens buy from every day.
In a world where pretty much every company claims they care for the environment and work towards equality, it is easy to be hypnotized by the best marketing stunts. The team at Gokind instead work with objective data and evidence of what companies actually have achieved. In the Gokind methodology, more than twenty objective indicators, called “Badges”, have been selected. These are noteworthy sustainability achievements that a company either has or doesn’t have. Example of badges: That a company has gender-equal management (40-60%), has reduced its total emissions over a certain threshold (-10% year to year), or has union agreements in place for all its affected employees. In addition to the high objectiveness of these badges, they come with another major benefit: Comparability. The badge system allows citizens to compare companies within every industry, making it easier than ever to make informed decisions. Putting companies head to head also creates a natural call to action for slow movers to kick start their sustainability work.

The rocket fuel from MediaFutures.
At the focal point of the MediaFutures project is the aim to introduce the next generation of technology and solutions that radically can improve citizens’ access to engage with critical information. With the help of the advisors, partners and other participants of MediaFutures, Gokind was able to develop and deploy the platform that brings tailored sustainability to the doorstep of each citizen. Gokind has been released in Sweden, and the platform is already providing a huge coverage of sustainability insights, an average of 70% of the users’ transactions.
Thanks to support and financing provided as part of the MediaFutures program, the Gokind solution reached such maturity that the team during the program was able to secure both investors and commercial partnerships and is currently planning a pan-European expansion during 2022.