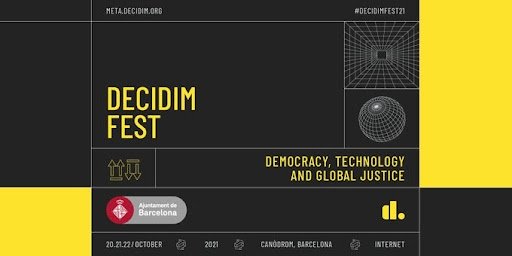 The event format is hybrid: physically in Barcelona with some speakers by videoconference. The Decidim Fest is open to all and free of charge, with previous registration.

Decidim is a digital platform for citizen participation. It was started by the Barcelona municipality as a Free Open-Source software, and since then it has been growing and spreading as a participatory democracy platform for cities and organizations. It features strategic planning, participatory budgeting, initiatives and citizen consultations, participative processes, assemblies, networked communication.

Decidim is now used by many municipalities worldwide including Mexico City, Helsinki and New York City, by organizations such as Greenpeace, and institutions including the French Senate or the European Commission.

Decidim is an outstanding example of software that is not owned and maintained by a private company, but is promoted by a public institution, and is developed and maintained in an ecosystem of citizens, organizations and developers. This is especially important in the setting of participatory democracy.

Decidim is defined as “more than a digital platform: it’s a common’s free and open project and infrastructure involving code, documentation, design, training courses, a legal framework, collaborative interfaces, user and facilitation communities, and a common vision.” The community gathers every year in the Decidim Fest, where topics of interest are discussed, so don’t miss the #decidimfest21!