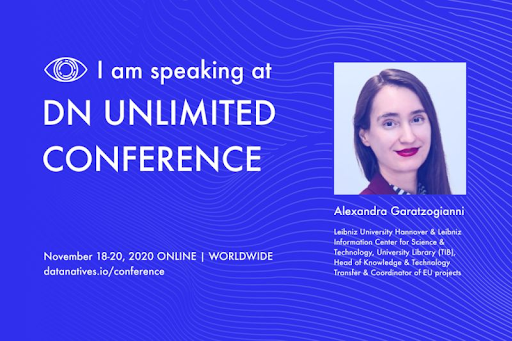 From 18th of November to the 20th of November, Alexandra Garatzogianni, Alina Brockob and Gerrit Rosam represented MediaFutures at DataNatives. Data Natives is Europe’s largest meeting point for the data-driven generation and world’s largest community of data-driven professionals.

This year the event took place online with over 5.000 attendees and over 160 speakers surrounding the topics of Data Economy, Data Science and Future Society.

Social media’s dead: “From deepfakes to fake news and/or the path to data sovereignty”

At the event Alexandra Garatzogianni (Coordinator of MediaFutures) represented Mediafutures at the Panel “Social media’s dead: “From deepfakes to fake news and/or the path to data sovereignty“. Together with Jordan French (Executive Editor, Founder at Grit Daily), Thorsten Dittmar (Founder at Polypoly) and Kathrin Steinbichler (Senior Editorial Manager at Looping Group she discussed the impact of AI-based scams and deep fakes on society. Because the media plays an important role in our collective decision making, the effects and developments of new technologies are a frequent and popular topic of discussion. In the panel Alexandra Garatzogianni argued that in order to safeguard our democratic institutions and our humanity it is important to build capacity on critical thinking and media literacy. 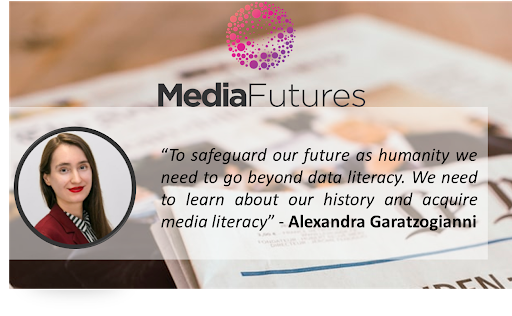 To illustrate some of the negative effects that technology has in media: After fake news, the new frontier of AI-based scam are deep fakes. According to Deeptrace, there were 7,964 deep fake videos online at the beginning of 2019; nine months later that figure jumped to 14,678. Named the “dark side of AI”, deep fakes are the use of AI to create and edit seemingly real videos and audio recordings of people by using Generative Adversarial Networks (GANs), algorithms that can create new data from existing datasets.

The panel discussion was recorded and can be watched here: https://bit.ly/3mzDFI1

Alina Brockob and Gerrit Rosam represented MediaFutures in other discussions and networking sessions. Other notable panel discussions included “From Twitter to TikTok: Mining political communication on social media”, “Propaganda Analysis with NLP: What Can We Possibly Learn from “Fake News?” as well as “Data Science at The New York Times”.

Find out more about MediaFutures

MediaFutures actively contributes to finding solutions to the challenges addressed at DataNatives by setting up a Datadriven Innovation Hub. Startups and Artists can get up to 80.000€ equity free funding as well as support from some of Europe’s strongest institutions and innovators in Media, Data Science, Art and Journalism. The First Open Call already launched! Find out more about Media Futures and how to participate in our upcoming Webinar: https://register.gotowebinar.com/register/4116299266568058635