The Map of Migrants, the data-driven tool against misinformation 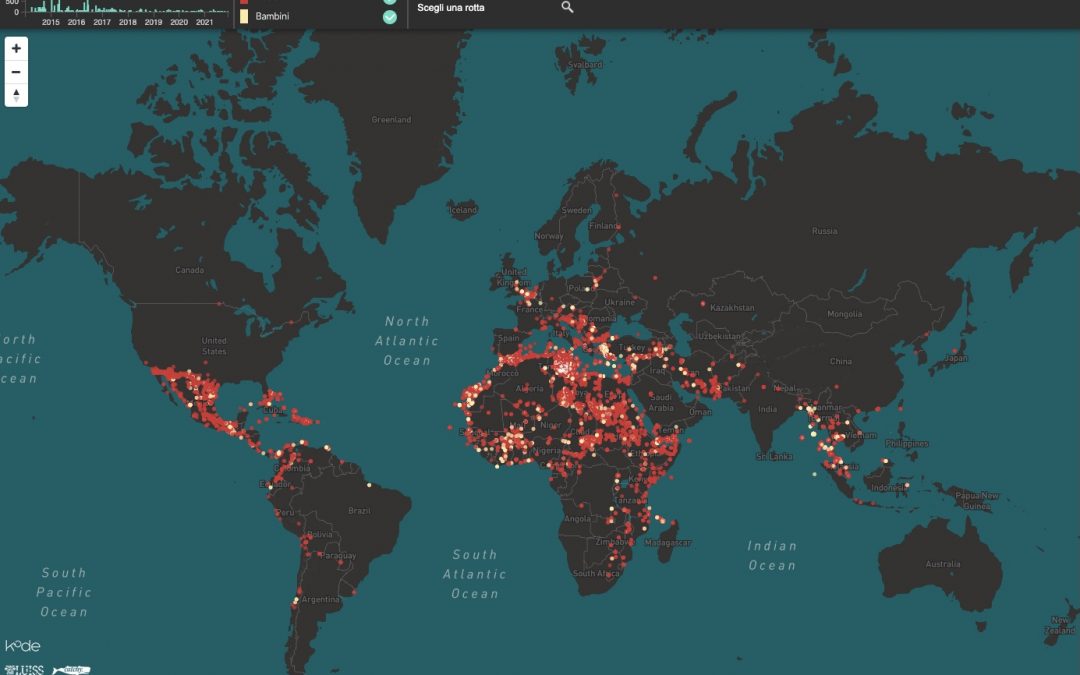 Every day, the desperate journey towards richer countries is costing thousands of human lives: children, women, elderly. Among the forgotten refugees and migrants there is a kid named Kenzi, who was three years old when a strong wave capsized the boat that was carrying him from Algeria to Italy.

The Map of Migrants by Luiss Data Lab is an interactive document of Data & Geo Storytelling, which provides a representation of the deaths that occurred in the exodus of recent years. An information and E-Literacy tool for a crucial theme in the international socio-political debate in recent years, a topic that has been the target of a massive campaign of misinformation.

The intent is to communicate the humanitarian emergency, in visual and spatial form through the stories of life of thousand migrants and refugees, stories of hope that too often ends in tragedy.

For the preparation of the dataset references, the researchers and students of journalism have analyzed and processed open data made available by the portal Missing Migrant. The data were collected through official records offered by governments and NGOs, traditional media and social media platforms but also through testimonies and interviews with survivors.

Information is found across various types of sources and compared with  records already collected in order to avoid multiple counting of deaths. The dataset is constantly updated and refers to deaths that occurred both on land and at sea.

Despite the downward estimates the numbers remain staggering. Since the initial reporting date, December 2013,  41.833 men and women have lost their lives and 2.493 children have died.

The geographic distribution of information is done by Geo Intelligence tools that allow the exact location of each searched position on a planisphere.

The result is a realization of a world map on which are present all the recorded deaths, represented via dots – red for adults, yellow for children – positioned in the exact place where the tragedies occurred. This allows a global vision of the fatal migratory routes, the darkest places of massacres ignored by the media.

Interaction, from global to punctual

The new technology opportunity represents the possibility to “zoom in” on the map, to move from a macroscopic viewpoint of numbers to a global understanding of the migration phenomenon by focusing on the fact that behind numbers there are human beings who struggle for their lives.

With a click on the links to the data sources, you can read information about the event: date, causes, description, number of deaths and missings, possible survivors… You can then calibrate the visualization of different datasets, isolate the information of adults or children, and visualize the evolution of the routes in different time frames. Further, there is the possibility of selecting different routes to which a specific narration is dedicated.

Junior, Ali, Mamadou, Boubacar. The List of names, Oxfam Italy and Doctors Without Borders photos show us the real faces of the tragedy, the victims of the drama behind the data.

The main routes, the Mediterranean

“Some think they will find a better life in Europe; others are fleeing war. But they all feel they have no other choice.”  With these words Hakim Bello described his experience. He arrived in Libya from Nigeria by crossing the most dangerous European route: the Central Mediterranean. Over 17.800 people died in that stretch of sea during the examined period. The boats leave from the Libyan coast with the hope of being recovered in international waters by military ships or NGOs. Many of the migrants have been imprisoned for months in Libyan detention centres, suffering violence and abuse. The destination is Lampedusa, a small island about 140 kilometers from the Tunisian coast. “While in past years it has been the destination of large ships, today the traffic is mainly made up of small wooden boats departing from Tunisia” wrote Annalisa Camilli in Internazionale Magazine.

Eastern Mediterranean is the primary channel for arrivals to Italy  from Turkey via the Greek islands. There is no specific data on this flow which are also part of the so-called “ghost landings”, small boats from the Turkish coast arrive at Salento or Calabria (South of Italy). “We’re talking about Syrian, Kurdish, Pakistani immigrants, most of them are headed to Germany. Among them there are economic migrants, schooled people, and well-educated families. They pay a high price for barely having acceptable transport conditions” Giuseppe Capocci – the prosecutor of Crotone – told during an interview with Corriere della Sera. On June 3th, 2018, a speedboat carrying 15 -people suffered a breakdown and sank near the Turkish coast. In the accident two men, a woman and six children lost their lives. “The smugglers put us on a boat. I thought there would have been a captain, but  No one, no one on board knew how to sail, it would take ten minutes to the Greek coast, but we were stuck in the same place for two hours and in the end the boat sank” a Syrian survivor reported.

The Strait of Gibraltar is likely to be about 14 kilometers and there is a maximum of 200 kilometers between the coasts of Andalusia and Morocco. It is the Western Mediterranean route, crossed mainly by Moroccan citizens. The Spanish government built a huge fence that separates Ceuta and Melilla, two Spanish autonomous cities bordered by Morocco. Thousands of people try to climb over the fence; the one in Melilla, nicknamed la Valla, “the barrier,” is tall, frightful and built on multiple levels.

Once in Europe, many immigrants try to move to countries that offer more opportunities. Until 2018, most of them wanted to reach the United Kingdom, but they died trying to board trucks and trains before entering the Channel Tunnel. Since 2018, the reinforcement border controls has made this option impossible and has, in fact, opened a new route that connects the Breton town of Calais to the English Dover. In addition, after Brexit, it has become more complicated to reach the UK through family reunification and legal routes. While the French and British governments are discussing border control, on November 24, 2021, a boat sank off the coast of Calais and 27 people died in the worst tragedy of the channel.

The sea is not the only escape route. The tightening of borders and the creation of the European border police, Frontex, have restricted the passages in the vicinity of the Balkan countries. In response to the provocations of Belarusian President Lukashenka, who is using the migratory flows to blackmail the European Union and pushing refugees against the Polish border,  the Polish Prime Minister,  Morawiecki, deployed twelve thousand soldiers to “defend the European borders”. So, thousands of people remained stuck in no man’s land, inaccessible to humanitarian organizations.

“Death Rides in Rio Bravo” is the title of a 1961 Sam Peckimpah western film, but it is also what is still happening today on the banks of the river that divides the two states. Migrants, threatened by the Border Patrol, jump into the Rio Bravo and drown. Other illegals attempt to cross the border crammed into trucks, but traffic accidents are common.

During his tenure, U.S. President Trump has made it more difficult to apply for asylum and, under the guise of a pandemic, has strengthened border closures. In early 2021, Biden, the current US president, had suspended the immigration program, “Remain in Mexico”, which provides for immediate deportation pending the decision of the authorities. The Supreme Court, however, called the decision “arbitrary and unjustified,” forcing the administration to reinstate it.

“Bingo!” written on a white sign in glittering red letters is the first thing survivors see after crossing the Mexico-Texas border.  It’s an advertisement for an amusement arcade not far away, but for those crossing a border it seems like a reminder: to get there and to have a decent life in the western states, you must be lucky.