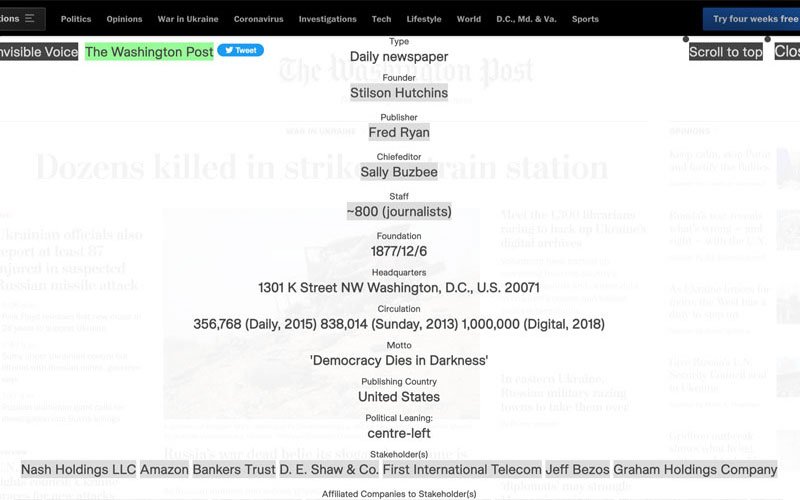 There are profound consequences if the chicken comes before the egg

Individual knowledge that is cultivated privately and never spread, exists purely for the individual. The media, “the main means of mass communication” exists to explain to the collective of individuals events which have happened, but also those which are yet to take place.

Consumption of media has always been decisive and patriotic in so far as it is communicated in the language you speak, uniting an ideology with others who share your common language. Furthermore, through this uniting communities, it has always been a somewhat solitary exercise. Newspapers were never intended to be shared, more likely thrown away after having been paid for. Then, the introduction of the radio in the 1920s brought the media directly into the home, cementing the transition of media from a word-of-mouth experience shared with others to an individual, private experience where the content is rarely questioned. We more and more regularly consume media alone, through once analogue and now digital mediators – as such, our consumption of politics, culture, and entertainment has become an isolated experience, existing between us and the media. Or, more correctly, the media to us.

Media gives us context, highlighting not only our own social class but the functions of society in the wider world. Cultural influences, like art or film, have social influence; they teach us what is ‘cool’, how to interact with people, and even how to seduce partners. Political influences, like the news, allow us a perceived empowerment, giving the illusion of cultivating cultural and political awareness, and a sense that we have independently come to conclusions autonomously. This is a false perception. To acknowledge the authority and respect the media commands over the individual is essential.

‘Life in the United Kingdom: A Journey to Citizenship’, Edition 2, 2011, is one of the required readings to claim citizenship in the UK. In it are the words of the Home Office: “The UK has a free press, meaning that what is written in newspapers is free from government control. Newspaper owners and editors hold strong political opinions and run campaigns to try and influence government policy and public opinion. As a result it is sometimes difficult to distinguish fact from opinion in newspaper coverage”.

The responsibility of the free press is to ensure that a respect for the diversity of morals exists; to give voice to minorities and disparate cultures; and, crucially, to hold politics and politicians accountable. The press is meant to be a defender of civil liberties and a challenger of the status quo; and thus it is vital that the press remains free. According to the RSF World Press Freedom Index, in July 2016 the UK had the 38th freest press out of 180 countries, whereas the USA had the 41st, compared to 34th and 49th respectively in 2015. In 2021 the UK was 33rd and the US 44th.

It should also be recognised, that in the press being the accepted challenger for pushing boundaries, the media also sets the parameters and restrictions on what is culturally, socially, and morally acceptable. It chooses who and what to question, and it decides what we will be aware of. Fundamentally, it influences our decision-making, morality, and way of life by setting the limits on norms and the spread of information. In determining our perspective, the media decides our future, as their proleptic vision becomes reality. We don’t own the news, in much the same way as we don’t own our history – it becomes part of the collective record.

In much the same way as a text can shed light on an issue and change meaning in different contexts, the imagery, phrasing and framing of shots deliberately manufactures misinterpretation. To use an extreme example to highlight this, on 17th April 2015, writing for The Sun newspaper, Katie Hopkins wrote: “What we need are gunships sending these boats [Syrian refugees] back to their own country.” Five months later, on 2nd September 2015, Katie Hopkins wrote in the same newspaper: “Today The Sun urges David Cameron to help those in a life-and-death struggle not of their making”, attaching an image of a Syrian child who had drowned. This image alone emphasises the power of relatable imagery: the British population were swayed in the favour of allowing 20,000 Syrian refugees asylum in Britain – by 2020.

In practice, the free press distributes information with very little accountability. Rebekah Brooks was arrested and suspended as CEO of ‘News International’ as a result of the phone hacking scandal in 2011, but since 2015 has been the CEO of ‘News UK’, which amounts to little more than the renaming of a Rupert Murdoch owned media company. Meanwhile, the individual absorbs the media’s information often unquestioningly, rarely speaking about it, whilst quietly shaping their opinions.

The potential for the narrative of the reportage we are accustomed to in 2016 and 2017 to become fictionalised has grown. From the British people’s decision to leave the EU under many false promises to Donald Trump’s progression from the media’s villainous jester to the most powerful man in the world, indicate the real-world repercussions of the media’s spotlight and influence. Journalists and organisations who report false and speculative headlines and stories are not held to account. Social Media has challenged mainstream media, but only insofar as people now are given a platform to respond to the headlines of media companies – not set the agenda itself to be discussed.

As a suggestive way of exploring how the World Wide Web could be used as a form of protest, along with highlighting how news stories affect the individual, I received some support from Goldsmiths, University of London. In 2018 we created a small art-project web browser extension which focused on online advertising. The outlet’s revenue in advertising is directly proportional to the amount of page clicks it gets; by not visiting a site, that company loses revenue. Meaning, if we are to collectively boycott journalists, articles, or websites through loss of engagement, that organisation will lose money. Invisible Voice 1.0 was a plugin for Chrome and Firefox; every Sunday (31st December 2017 to 3rd March 2018), the plugin blocked one website from participants’ browsers for one week. This website was chosen weekly by a different person or institution, who decided and justified their choice with a written essay. This included journalists and film critics from The Guardian, The Daily Mail and The New Statesman, university researchers, disability campaigners and environmental activists.

Although successful in terms of user downloads, I decided to stop the one-year project after three months, because I felt that the bias of each block was becoming too obvious, and edging on a parody of preconceived ideas and beliefs. It introduced a micro-echo chamber that became the opposite of its intended aim: to empower the individual through the spread of expert information about each company, before said company received their online advertising revenue.

In a world where we receive our information from media companies, transparency about who the companies and people running them are should be a prerequisite to any functioning democracy. Tackling the spread of fake news – which has always been an issue for as long as media has existed, and empowering the individual through truthful and factual information about companies is the primary function of Invisible Voice. Now, in  2022, Invisible Voice aims to tackle these issues through a free educational art tool:

Invisible Voice is a free browser plugin which will reveal key information about the companies and individuals who own the websites that the user visits. A small button in the browser, when clicked, will open a pop-up, including: the owners, the parent company, any sister and affiliated companies, political leanings, revenue, assets, income, number of employees, environmental score, workers rights score, animal testing, their ESG (Environmental, Social, and Governance) score, Trust Pilot, B-Corp rating, along with much more information. It will also highlight any controversies and allegations in which the company is involved, as well as any track record of racism, sexism, homophobia, gender discrimination, poor environmental practice, cheap labour, tax avoidance, and other allegations and metrics. It will not only constitute a negative view: it will highlight where companies have made significant efforts to combat climate change or made real commitments to diversity and inclusion, for example.

Facts and truth sustain democracy; Invisible Voice arms individuals with factual and unbiased knowledge. It subverts the power structures of the digital ecosystem aiming to empower the individual to view and participate in the radical exposure of information otherwise veiled by the fabric and design of the capitalist ecosystem. Power is shifted to the collective of users, enabling them to reshape the digital – and physical – economy with the knowledge they are given.

Invisible Voice is set to be released in October 2022 and will be the first iteration of the plugin. We are looking for further funding to continue the development of the plugin once the MediaFutures residency concludes.